Hi everyone! It's been awhile since I've posted the going ons of the Ball Family. :) We are just catching up on chores and errands that got neglected while my mother-in-law was visiting. We had a great three weeks together and she just left on the 18th. That same day Sophia turned 20 months old!! I can't believe it is just 4 months until she is two.

We had a great time with Hilary while she was here. We went to Stone Mountain, did loads of shopping (Sophia got some great Christmas and Birthday gifts for this year), Hilary watched Sophia for Phil and myself so we could go on a few dates. I started calling them mid day dates because they usually occurred on his days off and we went to the bookstore to read and drink coffee. It was nice to relax but I must admit anytime I heard a little cry or someone saying bye bye I looked up. I guess it is to be expected. :) Hilary also got to go to a baseball game while she was here. Phil took her to see the braves play the Cubs. Phil roots for the Cubs so he was super excited when they won. Hilary and Phil were also on TV for the briefest of seconds because a braves player hit a home run to their area. Hilary said she thought she was going to get hit by the ball! :) Sophia learned how to say Nanny while Hilary was here and used it a lot! She would ask for her first thing in the morning and it was usually the last thing she said before she went to sleep. :)

While Hilary was here we celebrated both her and Phil's b-days! My family came up the weekend of the 9th for family photos and we had dinner out at McGuires. We all had a good time and it was nice to be all together.

Phil also hosted a BBQ while Hilary was here. He had a few of his friends from a Mustang forum come down and Phil made a brisket and a boston butt. It was sooo delicious! I had a really great time and it was very relaxing. No one was stressed out that day and everyone brought either a side or dessert so that was taken care of. All his friends from that forum are very nice and I have met several of them on different occassions. Hilary seemed to enjoy herself too she had several of the hot peppers that Mike brought and looked like she was breaking a sweat during the end.

We did all manage to get sick while she was here though. It kinda stunk because no one wants to be sick on their vacation. I'm getting over mine now and just praying that Sophia doesn't get it. Phil and I are now making plans to go over to England for Christmas next year. We were going to try for next summer but it might be easier at Christmas. We will see what happens we still have a few months to make a decision.

Now it is back to reality! Eating in more, doing more chores and running more errands. I'm looking forward to the coming months. Our church is having their fall classic softball game and it always a lot of fun. Then Phil has a car show in September and Halloween and the church fall festival in October. I think Sophia is going to be a 50's sock hop girl. I wanted to make her something scary like a cat or witch but it just isn't pratical seeing as she pulls everything off her head and you can't have a cat with no ears!! Or you probably can...has anyone seen a cat with no ears?! :)

Okay I'm rambling...but we are back and I plan on posting more now. I hope you are all having a great summer! 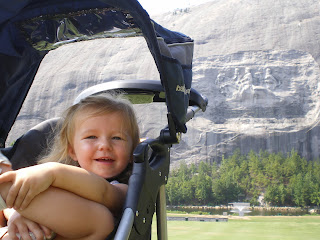 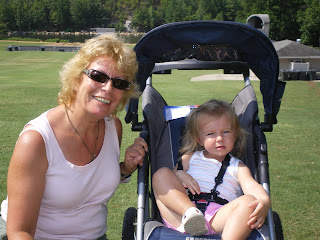 Nanny and Sophia at Stone Mountain. It was really hot that day! 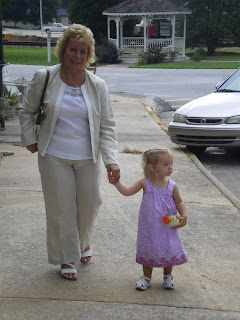 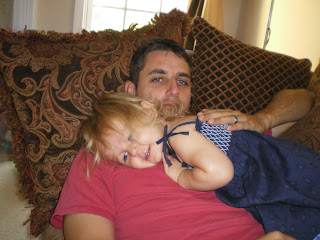 Daddy was sick so Sophia gave him some luvin. :) 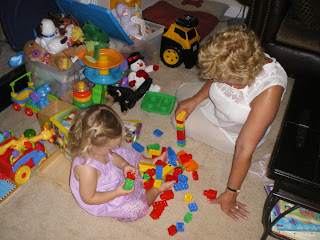 Nanny and Sophia playing with blocks.
Posted by Tara Ball at 7:24 PM 1 comment: