Okay well I just about decided to skip the Christmas post because it is now the end of January! Sorry it took so long but with one thing and another I just haven't gotten it done. :) Christmas was fun thought we went down to my (Tara) parents house. It was a really nice humid 75/80 degrees down there. Of course we packed all the wrong clothes and Sophia wore her Christmas outfits like a trooper but I'm pretty sure she was hot. On Christmas Eve we took her down to the waterfront to see the water and the different wildlife there is also a park there so she got some swing time in. She really enjoyed running up and down the pier and checking out the fish and the fiddler crabs. Later that night we took her to see the Christmas lights. There are a couple of streets in St. Marys that go all out every year. The whole neighborhood gets together and coordinates lights or have little white bags set out with lights in them. One house last year and this year had a three piece band and Santa in their front yard...that one was mine and Sophia's favorite. :)

Christmas morning we woke up and had a mini Ball family Christmas in our bedroom. We opened our stockings together and then got dressed and went out into the living room to see what else Sophia had gotten for Christmas. Phil and I had gotten her an art easel so my mom and dad bought her the supplies to go with it such as paints, color crayons, apron etc. They also got her a really nice child size rocking chair. Phil and I also got her a music set which had a tambourine, bells and a few other things in it that are escaping me right now. :) Phil's dad and his wife Angie got Sophia Tiny Tunes classes for the Spring. These are the music classes that she has been really enjoying. My sister got her a little people's princess castle that she just loves! If we are upstairs she wants it up with us if we are downstairs she wants it down there. :) Phil's sister got Sophia the little people school bus and she has been pushing that bus around and making it play the song until it is now stuck in mine and Phil's head. :) Her nanny ball and Goodwin got her a kitchen set and tea set. They also got her a trike that we have tried out a couple of times but haven't quite mastered yet. :)

Sophia growing up so fast now it is just amazing everyday to hear her! She is saying very short sentences now. Like duck bread when she wants to feed the ducks bread...or mama sit/more when she wants me to play with her and when she wants more of whatever I was doing. :) She knows to say please/thank you/excuse me...which comes out as me me. She now longer really wants my help with things and is fiercely independent. I normally ask her if she wants help and she will tell me yes or no. She dances...sings...and pretends now. The pretend thing is great at first she didn't get it and just looked at me nuts when I would pretend to eat a plastic banana. :) Now she plays along and we are working on having a tea party...where she doesn't think she needs to be in control of the tea pot. :) She loves our neighbors Robert and Carly and their baby Andrew. She asks about them daily and will yell their names and their dogs names when we pass their house. She has actual friends she asks about now. This shocked me about I was so used the parallel play that babies do that when she started asking about Reagan and Izzy I was a little taken off guard. She will normally say Reagan play or Izzy play...meaning she wants to play with them. :) She is just amazing to me right now all the things she does and how grown she is starting to look.

Well we haven't done a lot this month (January) sorry for the lack of posts but we have been to cold to get out and haven't done anything but stay inside. :) Not exciting stuff to blog about. :)

This is the first night we were at my parent's house. The kids were pretending to ride in a car. Sophia is the mommy holding her baby. :) If you look in the background you will see Phil...I think he was just a little tired. :) 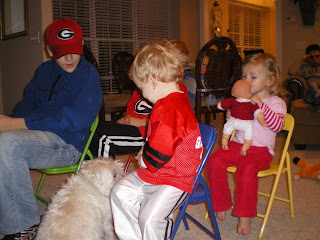 Sophia at the waterfront with her feet in ballerina position. 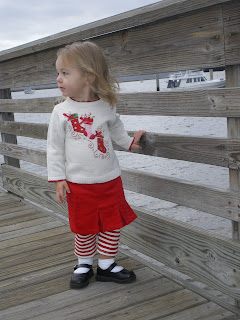 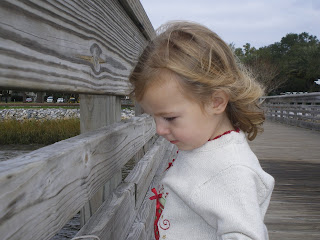 Checking out the Christmas tree poolside. :) 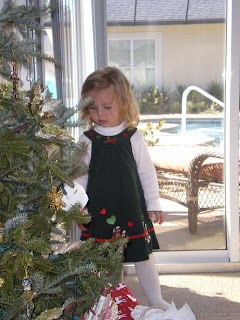 Josh(who she asks about all the time now) and Sophia playing with the castle she loves! 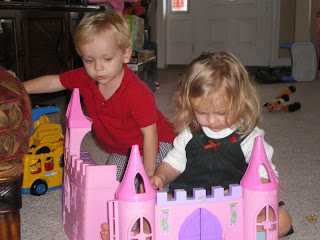