At the beginning of May Sophia had her school Spring Program. I was very excited about this because it is the one program that is in the evening so Phil could definitely come and I asked my parents of they would like to come up as well. My dad had to work but my mom came and Sophia was very excited to see her. She made my mom play hungry hippo and candyland as soon as she got in the door. Sophia did great during the show. She had been practicing the songs at home so I knew she knew most of the words. The motions to the songs were really cute and halfway through the show she thought it would be a good idea to start kissing on the boy to her left. :) After the kids were done singing they had a slide show of some of the pictures that were taken during the school days of the kids. Sophia liked finding herself in the pictures. I think she had a good time and it is always interesting to see what the kids are going to do. 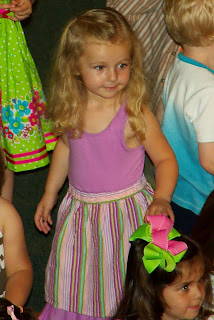 Sophia and Judd..this is the little boy she was trying to kiss..he wasn't very pleased about it. :) 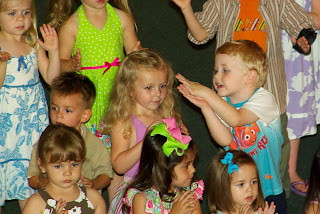 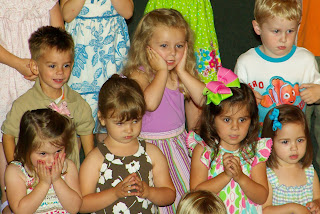 Little Owen surrounded by all the ladies. :) 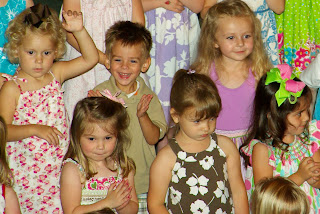 We also took Sophia to pick strawberries recently. If you have read my blog for awhile you know this has become a yearly tradition. She loves going and it is fun to see how she has changed over the years doing this activity. It used to be that she would just play now she is all business about picking the strawberries. I must admit it was easier to get cute pictures of her in the strawberry field when she would just play. :) 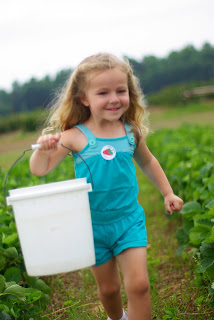 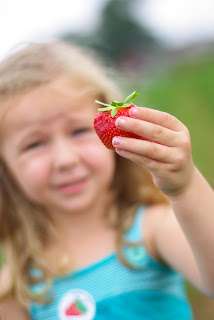 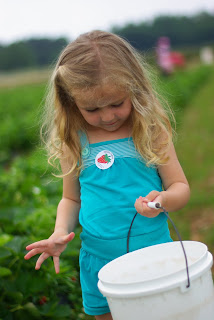 A couple of weekends ago we took Sophia to a local event called Touch A Truck. We tried to take her last year but she was scared to death of get this not the trucks but of walking around in the parking lot. :) Last year I had been working with her about holding hands while in the parking because of the cars driving around. Well it totally freaked her out and we didn't end up staying very long.

This year was a different story. She LOVED getting to see all the different trucks and wanted to climb in a lot of them. She was a bit worried though they were going to start moving but once I explained to her the keys weren't in the ignition she let loose. :) There also happens to be a BMX track across from where they were having the Touch a Truck event. Phil took Sophia over to watch them practice and now she is adament that she wants a bicycle so she can race too. We will see I guess. :) 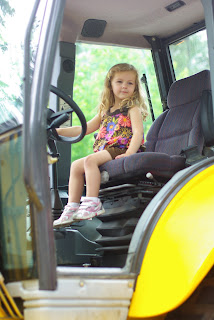 She thought it was great to honk the horn...and did it several times. :) 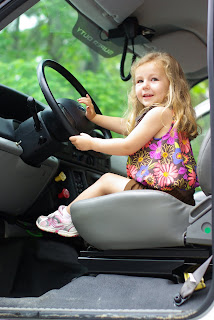 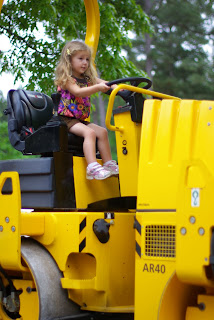 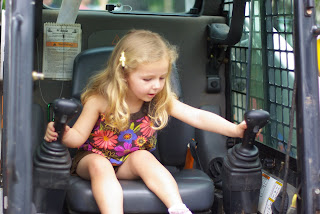 So most of you who know me know I'm not a fishing person. In fact until recently I was quite the wuss and would scream when one actually had the nerve to get on my hook. There are many reasons for the screaming and slight anxiety attack over this animal squirming around on the end of my line but I wont go into them here. I will say that I have gotten over them and sucked it up because Sophia quite enjoys fishing. She isn't half bad at it either. Now we haven't put a hook on her line yet because to be honest it scares me to death. She has a decent cast though and has fun just doing that.

We also got a good chuckle from Sophia tonight. We were feeding the geese right before we left and one got really close so I told her to squat down and the geese would get closer. Well she thought I said squawk so all I hear is her going squawk squawk. You have to love how kids minds work.

Sophia has become a pro she just casts and leaves her fishing rod. :) 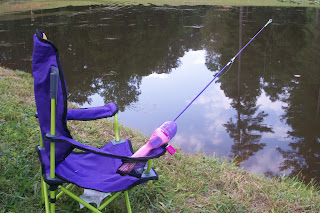 She helped Phil real this big guy in. :) 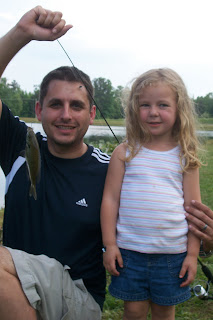 Happy Mother's Day! I've had a wonderful weekend and have been spoiled rotten. One of my favorite things that we did was go to Line Creek Trail in Peachtree City. They have a duck pond with a gazebo and dock but they also have a couple of nice walking trails and one of them leads down to line creek. So we were able to put our feet in and play around in the water. I hope all of you mommies had a wonderful weekend! To celebrate Mother's Day here are a few pictures of my sweet peanut. :) 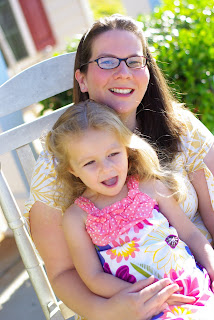 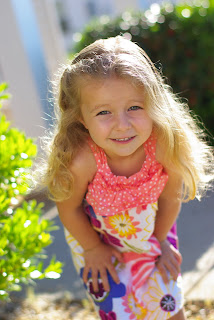 I just thought I would throw this one in...it makes me laugh. Sophia LOVES yogurt! She decided a yogurt mustache was in order the other night. :) 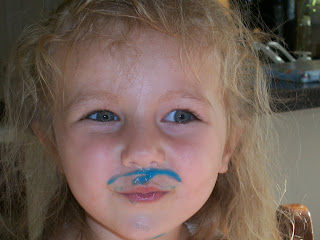