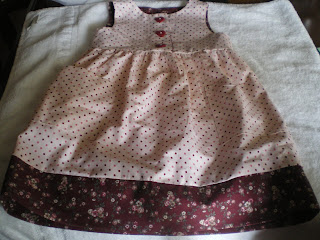 The dress my mom made from a Simplicity pattern that wasn't very simple. :) 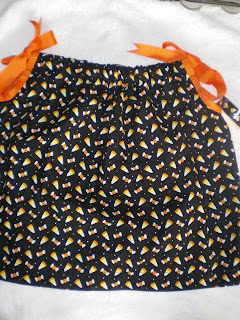 Halloween pillowcase dress...the ribbon for her hair is in the far right hand corner. 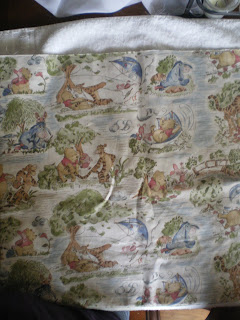 The beginning of the winnie the pooh pillowcase dress. I just need to do the arm holes and the ribbon. 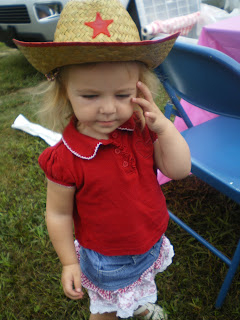 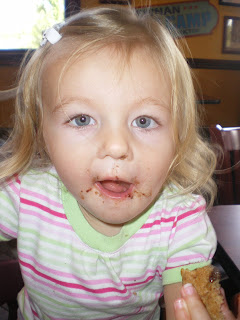 Sophia got to have a cookie after we got done playing at the park. :) 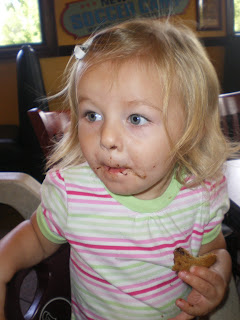 Another cookie picture...how did she get chocolate up her nose?!
Posted by Tara Ball at 2:29 PM 2 comments:

I had to start this entry off with Sophia's favorite word...Hi Ya!!! :) She yells this to everyone and waves very emphatically! :) She doesn't mind if they say hi back to her in fact they have to before she will stop but she doesn't want anyone to come close to her. If they get to close she will start crying and want me to pick her up. :)

September has been a very busy month for us. It started off with Phil going back to Australia for a week. He wasn't very excited about the trip mainly because of all the traveling but I think he liked it once he got there. By the end though he was ready to come home. :) While he was gone my mom came and stayed with me and Sophia. My mom was trying to teach me how to sew so we ended up make a few dresses for Sophia. My mom made a really cute one from a Simplicity pattern. Just so you know Simplicity patterns are not very simple for beginners. :) My mom did all of that one but I made a cute pillowcase dress for Halloween. The fabric has candy corn on it and I found some really cute candy corn ribbon to match it. Now I just need to finish the winnie the pooh dress for her. :) We had a great time while my mom was here and Sophia started calling her Nanny. My nephews call my mom Maga so that is what we thought Sophia would call her as well but since Phil's mom came over and she is Nanny I guess that is what Sophia is going to call my mom as well. :)


While my mom was here we took Sophia for her first haircut!! We just took her in to even out the back a bit. I was going to get bangs cut for her but decided against it because I didn't want to have to keep going back to get them trimmed. Sophia did really well better than I thought she would. Snip Its the place we took her to really caters to children and they had a big container of animal crackers and lollipops for them. They also had TVs in the wall so they could watch that while they were getting their haircut. The hairdresser told me to not worry because she was used to a moving target...strange but it made me feel better. :) I also liked the lap strap they had on the chairs to keep them from sliding out. Sophia's gotten pretty good at the going limp thing so you can't pick her up very easily. I must admit I used to laugh because I did that on many occassions to my mom...it isn't quite so funny anymore. :)


Sophia also went to Tricia's second birthday party this month. They had it at like an organic garden center. So they had a lot of flowers but also had chickens, cows, rabbits, pony and even a goat. :) It was a lot of fun and I think Sophia enjoyed seeing all the animals. They also took us on a hayride and we got to plant a flower in a pot to bring home with us. Needless to say we were all very tired by the end but also very happy.


Two of my friends Carly and Emorie had their babies this month as well. Carly had a baby boy and Emorie a baby girl. They were born one day apart. Sophia has enjoyed getting to see both babies on a regular basis and knows where they live now. :) Whenever we walk by Carly's house she points to it and says baby!! I took Sophia over to Emorie's house today to pick up Izzy (Emorie's older daughter) to go play at the park with Lana and her son Jackson and also April and her two kiddos Brook and Michael. We had a really good time and the weather has been so nice it was just good to get out of the house. After playing we met Emorie and baby Julieanna at Zaxby's for lunch YUM!! The girls were really good if not just a bit on the hungry side. :) Jackson showed off some of his mean dance moves to Sophia and she showed him how she could jump. :) Well that is it for now sorry for the delay in posts I've been slacking. :( I hope you all have a good weekend we are suppose to go to a car show in Senoia if it doesn't rain.

Sophia getting her hair cut. She has a princess leia thing going on here. :) 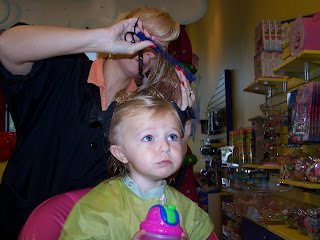 Sophia at her Tiny Tunes class. 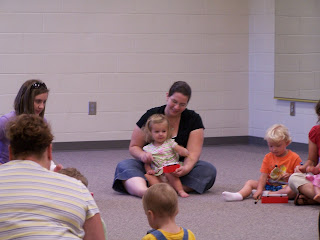 Tricia's b-day. Sophia standing with Reagan. They remind me of Tom Sawyer and Huck Finn here. :) 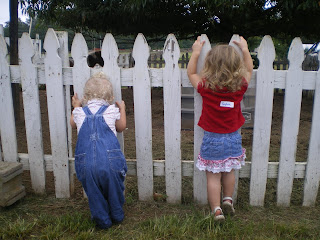 Izzy, Reagan and Sophia. I felt bad for this rabbit. 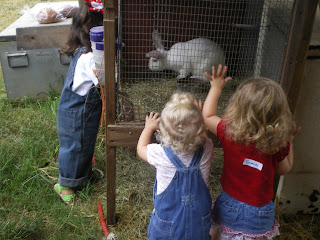 Izzy and Sophia playing in the sand. 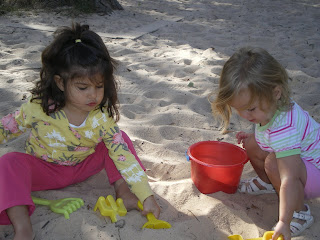