Father's Day weekend has been great!! I think we all had a really good time and especially Phil. :) The weekend started off with Sophia and I going to swim at the Canongate Golf Course with a friend of ours that is a member. You have to go with a member to keep the riff raff (like us) out. :) We got there at 11:00 and didn't leave until 1:30. Sophia did great and is really getting comfortable with the water now. They had a kiddie pool there that when she sat down in it, it only came up to her chin. She thought she was hot stuff not having to wear a swim jacket in that pool.

After the pool I rushed home to get her something to eat and put her down for a nap. We went down to our friends Carly and Roberts house for a pizza dinner that night. There were also our other neighbors Deena, Jason and their little boy Hayden and some friends of Carly's Susan and her husband and their little girl Addison there. So it was a full house but a lot of fun! We stayed until 10:00 I think that is the latest Sophia has been up yet. But of course she still woke up at 7:15 the next morning. :) Aren't little ones suppose to sleep in after staying up late??!! Guess not.

The next day we just stayed around the house and tried to clean up some. I did laundry while Sophia helped her daddy wash the truck. Phil has already told her in a couple of years that can definitely be her job. :) Sophia came into the house at one point to tell me about the snake that her and daddy had seen. Luckily it was in our neighbors yard but it still gives me the willies that it was that close to our house. We took Sophia to the park after cleaning and on the way there stopped and asked our very gracious neighbors if they minded if we came and swimmed in their pool that afternoon. They said no problem and after Sophia woke up from her nap we headed over to their house with Robert, Carly and Andrew. We stayed there for about two hours and then came back over to our street to have a chicken dinner with Robert and Carly. Phil helped Robert dig some bushes out of his front garden that he no longer wanted with the promise that Phil could have them for our yard for helping. So we have four new bushes in our backyard on the slope. It is really starting to look nice now with all our plants and flowers.

Yesterday was Father's Day!! Sophia was really sweet and gave her daddy his presents. She walked up to him and said Happy Father's Day. Sophia and I got Phil some new cologne and a travel coffee mug that has pictures of Sophia that I inserted in with a background that has a quote about Dad's behind it. Sophia did sleep in until 8 this morning which wasn't great because we have to leave for church by 9! We made it though and listened to a wonderful sermon about dads of course. :) Then we had lunch with our good friends Kandis, Dan, and Reagan. Sophia and Reagan are really good buddies now and give each other hugs and ask about each other all the time. All the way home she asked where Reagan went. :) We came home for Sophia's mandatory rest so she wouldn't be cranky because we headed back over to our neighbor's house to the pool. They were nice enough to ask us back over and grill out with us. They made delicious chicken, baked beans, mac and cheese and bread. YUM! Sophia spotted the cake right away and requested a piece with a strawberry on it. :) She loved playing with the other kids there and I wish I had taken her picture while she was coloring with them. She was laying on her belly just chatting away and coloring. She has gotten to be such a big girl and I'm happy but it is a little sad sometimes too. She starts pre-school in August and I'm excited for her but I will miss her...good thing it is only two days out of the week or I think I would be a real mess. :) Anyway Phil told me he had a great Father's Day weekend and that is all I could ask for. I wanted to make this special for him! Here are a couple of pics...we were to busy swimming to take a lot. :) I hope all the other dad's had a great weekend too!! 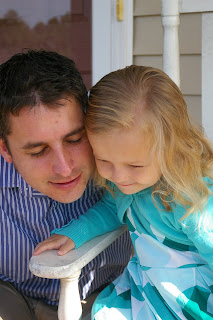 Our good friend Robert and his son Andrew. 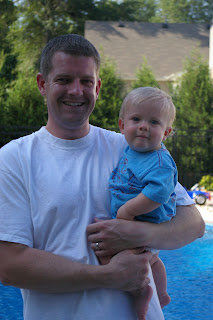