Join Me on My Journey!

I've been trying to lose weight for the past three years. Since Sophia has been born this has been a much harder task than before. I love her very much and like dedicating most of my time to her but that also means less time for myself. I've been mildly successful recently in that I have lost fifteen pounds and have managed to keep it off. I still struggle daily though and go on and off watching what I eat.

So I'm going to start dedicating a small part of this blog to my weight loss journey. I'm hoping that by blogging about it that I will stay motivated and accountable to other people. I'm not going to tell you my weight..but I will tell you that I hope to lose ten pounds by the end of December. I think this is a manageable goal. It adds up to a loss of two pounds per week. Since I'm starting this on a Tuesday I will write in then and tell you how much I have lost for that week. I'm planning on using the Weight Watchers plan. I've done it before and it works as long as you follow it. :) I will also try and write about what I eat and if I find anything good at the grocery store worth trying.

For this first week I'm hoping to lose two pounds by next Tuesday. It may be a little difficult as we have both my birthday and Sophia's birthday party. :) I've also already found a couple of good finds! If you don't get the hungry girl newsletter .you definitely should! The address is hungrygirl.com She has some great recipes and always has great recommendations for the grocery store. One of hers this week was the Jello Mouse chocolate puddings. They are fabulous and are only one point per pudding!! She also recommended bagel-fuls. I haven't tasted them yet but they look yummy! They are 4 points for one.

Now here is my completely horrible before pictures. :) I'm hoping to not look so bad in a few more weeks. 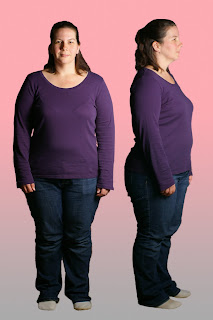 This past Thursday Sophia's school had their Thanksgiving Feast. All the classes contributed to the feast by making something that they were going to be eating. Sophia's class got to shuck the corn and then boil it. Other classes made pumpkin bread, cookies, green beans and there was even turkey on their plates. Sophia ate all of her plate and some of Judd's plate. :) She had a good time and enjoyed getting to show me everything she had made. It was also a good opportunity to meet some of the other parents. She talks about several of the kids but I had never had the chance to meet their parents.

We are now getting ready to go down to my families house on Wednesday and spend Thanksgiving with them. It should be fun Sophia has been asking to go for a few weeks now and she is particulary excited about getting to see Josh. :) After we get back it wont be long until Sophia's THIRD birthday!! I can't believe it! It seems just like yesterday we were celebrating her first birthday. This really has been a fun year...she can do so many things now and she makes me laugh everyday with the things she comes up with. Here are a few pictures from her Thanksgiving Feast. Hopefully I will have more when we get back from my parents house.

Little Indian Sophia. She made the hat, shirt, necklace and placemat. 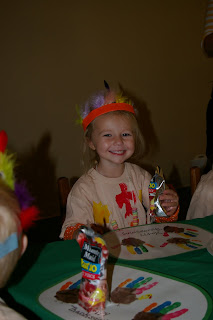 Sophia's table..L to R Sophia, Judd, Tyler, Amber and Cate. There was another table next to her with the rest of her classmates. 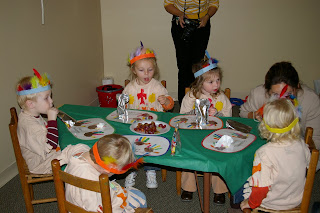 The rare mother/daughter picture..not sure what Sophia is doing. :) 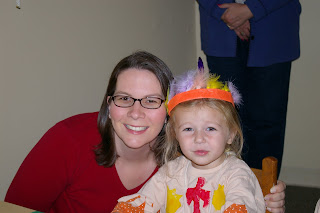