For those of you who don't live in Georgia or the States right now you are missing out on some wonderful weather!!  This is the time of year when it isn't freezing cold and hasn't turned blazing hot yet.  This type of weather usually only lasts a week so I'm feeling pretty blessed to be enjoying it for two!

I called Em the other day to see if she wanted to get together and enjoy this weather together.  So yesterday morning Sophia and I headed over to her house and didn't leave until late afternoon.  Emorie has a wonderful lot that is big with lots of trees but is also fenced in.  The girls spent most of their time out in the trees playing hide and seek and petting the neighbors dog that they named goldie. :)

We also helped Em and her girls plant some flowers which meant digging around in the dirt some.  After that they found a huge pile of leaves that had been raked up and jumped, rolled, buried each other and basically just scattered the leaves again. :)  When they finally emerged again both Izzy and Sophia were pretty dirty to say the least.  They had leaves in their hair, dirt on every thing, and Popsicle stains around their mouths.  I wish we would have taken a picture!

I told Em that it was a sign of a VERY fun day!!  We really love getting together with them and are looking forward to doing it again.

Here are a couple of pictures I left my camera at home and was totally kicking myself the whole time we were there...live and learn.

They hadn't buried themselves yet here..but do you see those purple shoes
next to Sophia's head??  They got lost in the pile and it was like trying to find a shoe
in a big pile of leaves!﻿ 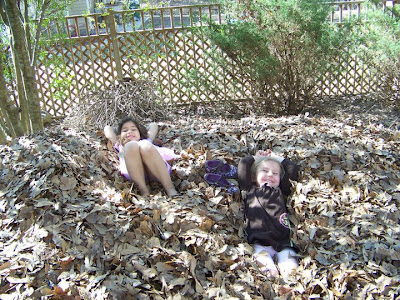 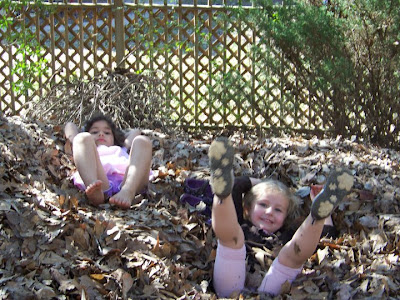 I hope you are all enjoying this great weather....we are headed out again now!