Sophia had her first soccer practice last Friday.  My friend Karen signed her little girl Alicia up to play as well.  Sophia was very excited to go!

I think she enjoyed it?  What I mean is Sophia is VERY competitive!  So we had a few crying moments because she wasn't the first one to get to a flag or she got tagged by the coach during another game.  She didn't understand that she didn't have to be first she just had to get to the flag and that even if the coach tagged her she wasn't out just to keep dribbling her ball.

There were also a lot of kids.  I was a little surprised at how many there were.  So she also cried because some of the kids who were chasing their ball accidentally kicked hers.  I tried explaining that it was an accident and that there were a lot of kids.

So we are going to go back this week and see how she does.  It was pretty frustrating for me because I was having to go out on the field and talk to her about why she was crying...so I'm sure quite a few people have my big ol' butt in their pictures and videos. :)

Here are a few pictures of when she wasn't crying lol!  She did look very cute I must say.


Alicia and Sophia before practice.﻿ 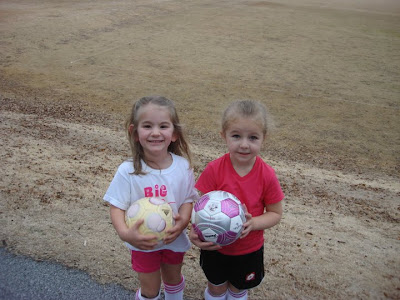 Warming up and walking around "The House"  they had to
try to stay in the house with their ball. 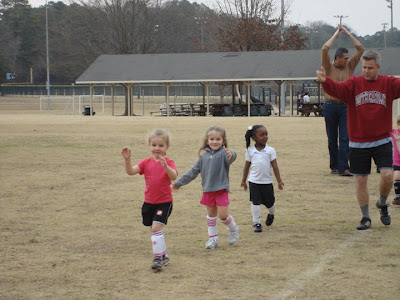 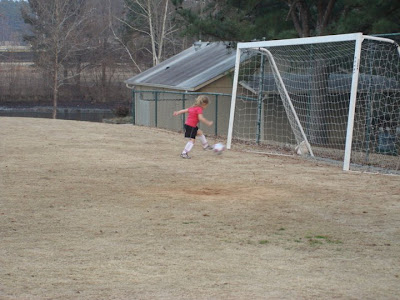 lol Phil got caught up in the net trying to help them get their balls. :) 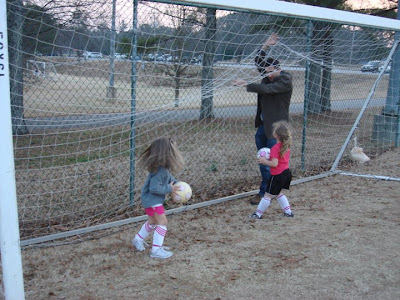 The rest of the evening was very nice and uneventful!  We went over to see Karen's husband Luis.  He is opening a new restaurant in Newnan called Los Gordos, they are going to serve Cuban food.  Look for him on facebook the food is going to be so good!  We then went out to Taco Mac for dinner to catch up some more.

I hope you all had a nice weekend!  Ours was beautiful and we were able to get a lot of outdoor chores done!